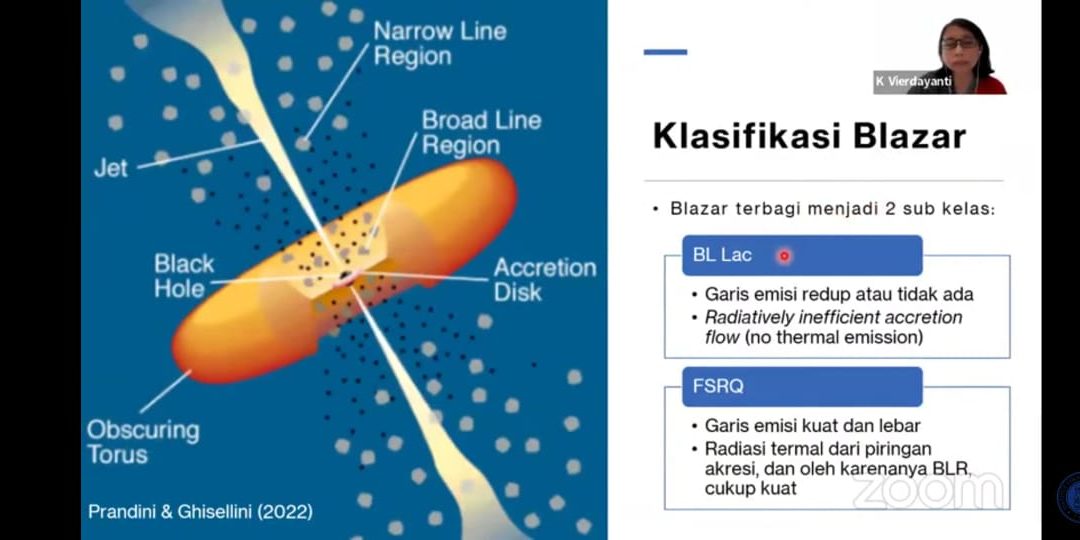 On Friday, 20 May 2022, the Astronomy Research Group, Mathematics and Natural Science Faculty, Bandung Institute of Technology held a colloquium with Dr. Kiki Vierdayanti as the speaker. She explained her research project entitled “Blazar’s Pilot Research as Multi-Wavelength High Energy Astrophysics Study Object”. Other than Dr. Kiki, the research was also carried out by a team consisting of Siti Fatima, Putri Mutmainah KA, Tiara Andamari S, and Tegas Gagas Impian PN, all three of whom graduated from ITB Astronomy Bachelor program and are currently as magister students. The colloquium was held online via the Zoom meeting platform.

The background of this pioneering topic stems from the development of a high-energy astronomy research topic in ITB Astronomy Research Group. The scope of high energy astronomy is quite broad, but Dr. Kiki is more interested in the phenomena related to the blackhole and accretion process. Another background is considering the development of astronomical facilities, namely the existence of a national observatory, such that there are the needs to take research from these facilities, potential opportunities for collaboration with other researchers, especially abroad, development of multi-wavelength (multi-messenger) research topics, as well as opportunities for student involvement, and alumni in research. With these various considerations, blazar was finally chosen as the object of this research.

Blazar is a subclass of AGN (Active Galactic Nuclei). The study of AGN has been quite long and it has been known that AGN has a very diverse class of objects. The diversity of characteristics of AGN observations in general can be explained by the effect of orientation of the observer. AGN has a component consisting of a supermassive black hole with an accretion disk, corona, BLR, NLR, torus, and there may also be relativistic jets. The AGN that emits this relativistic jet is known as a blazar. The relativistic jet is emitted in an orientation that is more or less parallel to the observer’s line of view.

Blazars are grouped into two subclasses based on their line features, namely BL Lac and FSRQ. BL Lac has a very faint emission line, has an inefficient accretion flow, and the resulting spectrum is non-thermal radiation. While FSRQ has a strong and wide emission line, has a more efficient accretion flow and produces a spectrum of thermal radiation. Blazar has an interesting observational characteristic called the blazar sequence which was first proposed by Fossati et al. (1998) used multi-wavelength data from 126 blazars. The study was revised by Ghisellini et al. (2017) and both of them get results in the form of a trend of shifting peak and Compton peak frequencies as the luminosity increases. However, Ghisellini found that the two subclasses produced different trends. Along with the increase in luminosity, in FSRQ there was no shift in peak frequency while in BL Lac there was no increase in Compton peak.

The object chosen in this study is Blazar BL Lac OJ 287. This object is quite popular because in 2017 – 2020 it experienced a semi-periodic increase in brightness so that this object is known as a strong candidate for supermassive binary black hole (SMBBH). The idea of the existence of SMBBH at OJ 287 was first proposed by Silanpaa et al. (1988) who found a significant increase in brightness that repeated at 11.65 year intervals. They explained the increase in brightness with tidal interference by the secondary SMBH orbiting the primary SMBH. Observations and research on these objects are intensified after the finding of an increase in brightness that has a double peak. By modifying and improving several parameters, Lehto and Valtonen (1998) found that the double-peak structure is more easily explained if the orbit of the secondary SMBH penetrates the accretion disk of the primary SMBH twice in its orbit.

This study utilized Swift UVOT – XRT observation data for the period 2005 – 2017. The XRT 2005 – 2016 data showed that the maximum X-ray flux did not coincide with the time of the optical outburst. The continuous X-ray spectrum modeled by the simple power law model shows an increase in the value of the photon index as the flux increases. Meanwhile, UVOT data showed a greater increase in brightness from October 2016 to January 2017. The increase in flux in the 2016-2017 period was also followed by an increase in flux in X-rays. The X-ray spectrum reached a state with a very steep photon index value at 2016 – 2017 strengthens the alleged difference in characteristics between the first peak and the second peak.

After obtaining optical, UV, and X-ray data, this study also tried to build a spectral energy distribution (SED) with the aim of replicating the SED produced by Valtonen, Ciprini, and Lehto. The resulting SED was in agreement with the 2000-2010 outburst data which in the X-ray range was observed using XMM-Newton. This study also tries to process FERMI LAT data in the period 2008-2017. The result is that there is an increase in brightness observed at optical, UV, and X-Ray wavelengths in 2016-2017, but at the gamma ray wavelength no significant flux changes are observed. Meanwhile, changes in the shape of the spectrum are only clearly observed in the X-ray range. Dr. Kiki also explained that the Multiwavelength Observation and Modeling of OJ 287 (MOMO) project studied observations with a fairly wide range of wavelengths, the project found that if the first and second peak events occurred at the same time at the optical, UV, and x-rays.

Currently, ongoing research is trying to utilize SWIFT data with blazar data from the FERMI 4FGL – DR2 data catalog, then perform RA filters and appropriate declination for observations in Indonesia so that there are opportunities to develop optical observations, observation duration filters, flux filters, and search for data slices with SWIFT observation data. Then, redshift and flux information will be collected at various wavelengths with currently only being prioritized for 16 blazars with the highest observed frequency on SWIFT. [Beta Miftahul Falah]