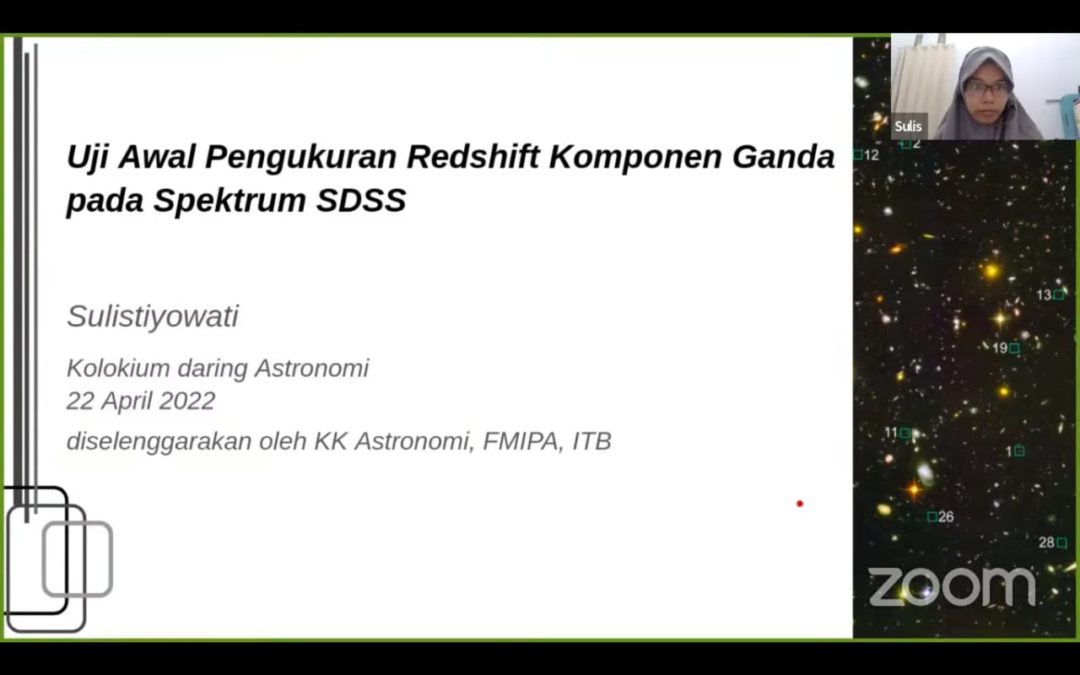 Redshift is one of the most crucial thing in astronomy because redshift measurements allow astronomers to measure distances of distant objects in the universe and even learn about the expansion of the universe. Researches related to redshift measurements have been carried out by many astronomers, including Sulistiyowati, M.Sc., an alumnus of undergraduate and master’s degree from the Bandung Institute of Technology who currently works at Influx Inc and a researcher at SkyLabs Org. She delivered her research entitled “Preliminary Test of Double Component Redshift Measurements in the SDSS Spectra” at a colloquium held by the Astronomy Research Group, Faculty of Mathematics and Natural Sciences, Bandung Institute of Technology on Friday, 22 April 2022. This colloquium was conducted online through the Zoom platform and also broadcast live via the Astronomy Study Program’s YouTube channel.

The research, which started in 2019, was motivated by gravitational lensing. Gravitational lensing occured when two objects consisting of a source system and a lens, usually consists of two galaxies that need to be measured for their redshift. Based on this motivation, in addition with the many new imaging and photometric surveys being carried out nowadaysa and in the future, the research is aimed at building an automated system to measure the redshift of components in a gravitational lens system. Meanwhile, the short-term goal of this research is to measure the spectroscopic redshift of galaxy components in the SDSS spectra.

SDSS (The Sloan Digital Sky Survey) is a multi-filter imaging and spectroscopic survey on Earth based at Apache Point Observatory, New Mexico, United States. This survey is claimed to be able to produce the most detailed 3D map of the universe than any other survey. SDSS coverage mostly observes objects in the Northern Hemisphere. This work focuses on only two surveys, namely the Legacy survey and the BOSS/eBOSS. Vital information in this work is contained in an SDSS spectrum, namely .FITS format which is then retrieved for clean spectrum information, the best model from the SDSS pipeline fitting, and its spectroscopic redshift value.

Currently, redshift measurement is divided into two main methods, namely by whole template matching (matching to all spectrum template data points) and line matching (matching spectrum data points from observations to a certain set of line profiles). Each method has drawbacks. In the whole template matching method, it is necessary to ensure a complete template database for various types of objects and it takes a long time for the cross-correlation process so that this method is computationally expensive. Whereas the line matching method relies heavily on line modeling and has the potential to lose the true line in the low S/N case. Instead of choosing one method, this study combines the two methods by making slight modifications. The step to carry out this hybrid method begins by building template residues and spectral data residuals. The template residue is obtained from the difference between the spectrum data and the main trend in the spectrum template. While the main data residual is obtained from the difference between the raw spectral data and its best-fit. The resulting residual only leaves features that have not been matched to the best-fit SDSS so that other secondary components are expected to be found. The next step is to perform residual line matching. In this step, we use a line profile with a double Gaussian model consisting of red and blue galaxies. The result of this step is a list of redshift candidate values ​​along with their SNRs. Next, a whole residual line matching was performed by matching the template residue with the residual spectrum data, then the redshift value with the smallest chi-squared was taken. Until this stage, the spectrum values ​​are matched to the red line template and the spectrum is matched to the blue line template. It is necessary to decide one of the two spectrum values ​​by creating a scoring system to choose the best model by determining which one has the higher SNR, has the SNR with global peak value, and has the best chi-squared. The results showed that of the 24 targets tested, 18 spectra were found whose components matched the red galaxy. Of those objects, 15 matched the predecessor study, while the other 3 turned out to be blue galaxies with redshifts outside the SDSS wavelength range. From an independent test of more than 150,000 objects (measurement against a mock), the detection rate is only less than 5%. Interestingly, many return a redshift value of their primary component which indicates the line strength could be important. Therefore, it can be concluded that the system built in this work is more sensitive in measuring the redshift of red galaxies which is correlated with the absorption line than the blue galaxies which is correlated with the emission line. The K&H line is also good enough to be used as an initial estimator in finding candidate of the redshift values. Sulis said that this research was not yet fully completed. There are several interesting things to study further, including the need to rebuild the mock spectra with better assumptions, exploration of other emission lines as initial estimators for blue galaxies, and the most interesting thing is that it is also possible to add gravitational lensing factor to determine the pair probability. source and lens locations, then enter those elements into the scoring system. [Beta Miftahul Falah]