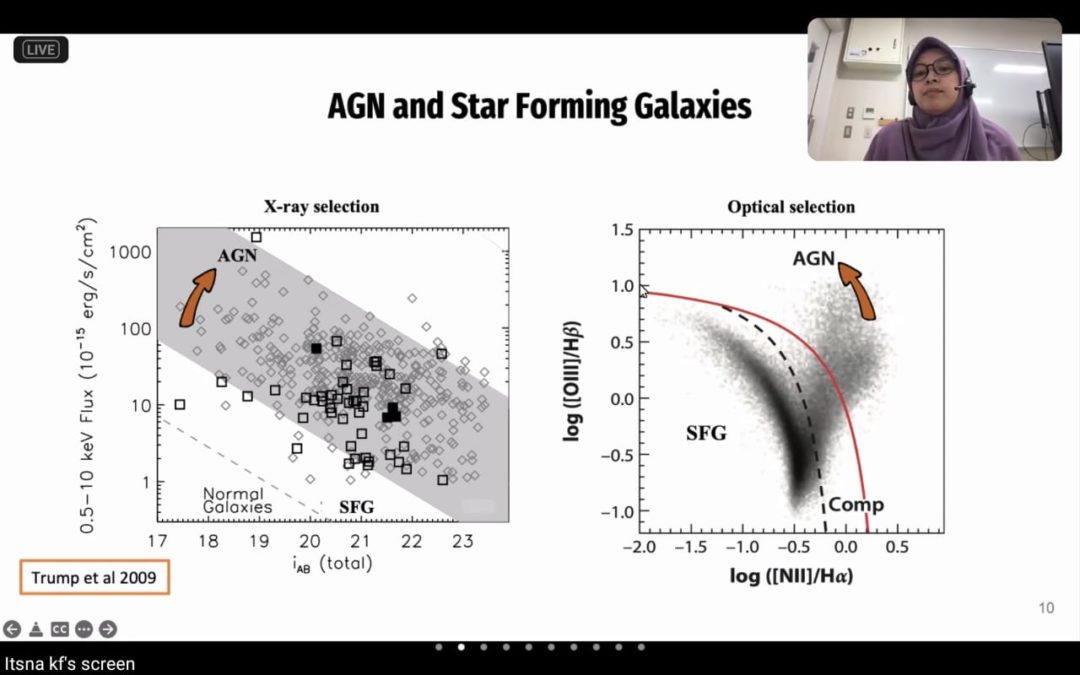 On Friday, April 8, 2022, the Astronomy Expertise Group, Faculty of Mathematics and Natural Sciences, Bandung Institute of Technology held a colloquium entitled “Optically Dull Active Galactic Nuclei in COSMOS field” online through the Zoom Meeting platform which was also broadcast live via the YouTube channel. The colloquium is not only attended by the academic community, but also the general public who are interested. This colloquium was delivered by Itsna Khoirul Fitriana, Ph. D, alumnus of the ITB Astronomy Study Program who continued his master’s and doctoral studies at Tohoku University. Currently, Itsna is a post-doctoral researcher at Tohoku University with his study on Active Galactic Nuclei (AGN). The colloquium was opened and led by Dr. rer. grout. M. Ikbal Arifyanto, Lecturer of Astronomy Study Program, Bandung Institute of Technology.

Active Galactic Nuclei (AGN) are the bright cores of galaxies as a result of the ongoing Supermassive Black Hole growth from accretion of surrounding matter. In the literature, AGN can be found under different names, depending on the observed characteristics. Astronomers try to make a unification model to unify these differences, one of which is Antonuicci (1993) who makes a classification based on the point of view (object inclination angle) of observation because each observed area will provide a different structure depending on the direction of observation.

The model classifies AGN into two types, namely type 1 (Broad Line (BL) AGN/unobscured AGN), namely AGN that is not blocked by the torus section consisting of a dusty absorber and type 2 (Narrow Line (NL) AGN/obscured AGN). , namely AGN blocked by dusty absorber. The BL region produces a wide emission line because all structures can be observed without being obstructed by the torus, whereas the NL region produces a narrow emission line. BL emissions are only found in AGN, while NL can be found in other objects such as in galaxies that are actively forming stars (star forming galaxies), so a way is needed to distinguish AGN from star forming galaxies, one of which is by comparing the ratio of emission lines either through optical and X-ray observations. AGN is richer with high ionization lines and has a brighter X Ray. However, studies in recent years have found objects that have X Ray emission similar to AGN but lack the AGN emission line when observed in the optical spectrum. This is called Optically Dull (OD) AGN.

There are three hypotheses that suggest the possibility of optical dullness in OD AGN, namely obscuration (there is another barrier material besides torus in AGN), dilution (AGN is less bright than the host galaxy), and low accretion (AGN has a different core structure that causes radiation differences). . This study of OD AGN is expected to provide an overview regarding the evolution of accretion disks from standard thin disks to Radiatively Inefficient Accretion Flow (RIAF) thick disks.

This study uses parent data from the Cosmic Evolution Survey (COSMOS Project), a project that uses multiwavelength observational data. The survey is suitable for observing the evolution of galaxies because it can observe redshifts from far to near. The aims of this study are to find the optical signature of AGN in the COSMOS field, to study the difference between OD AGN and NL AGN, and to study the reasons for the existence of OD AGN. In this study, samples were selected from the C-COSMOS catalog so that in the end only NL AGN and OD AGN samples were obtained by performing X Ray selection. By comparing NL AGN and OD AGN, it is known that NL AGN has a better relationship between X Ray and OII emissions. Whereas in OD AGN, the relationship looks more spread out, which states that if it is possible for AGN contamination to occur, it means that the AGN part can be ignored because there are more data from the host galaxy.

In studying the presence of OD AGN, related to dilution, this study showed that 76% of the samples were diluted by the host galaxy. For the accretion rate, calculated from the Eddington rate and by comparing with previous studies, it was found that 95 out of 180 OD AGN showed a lower accretion rate than AGN which indicated the presence of weak nuclei. Meanwhile, from obscuration, the samples in this study did not show a certain trend, all OD AGN samples were below the Compton Thickness which indicated no high obscuration was found in the samples. Therefore, from this study it can be concluded that the main possibility of the presence of OD AGN only comes from dilution and low accretion, not by obscuration. [Beta Miftahul Falah, M. Hasan Faadillah]