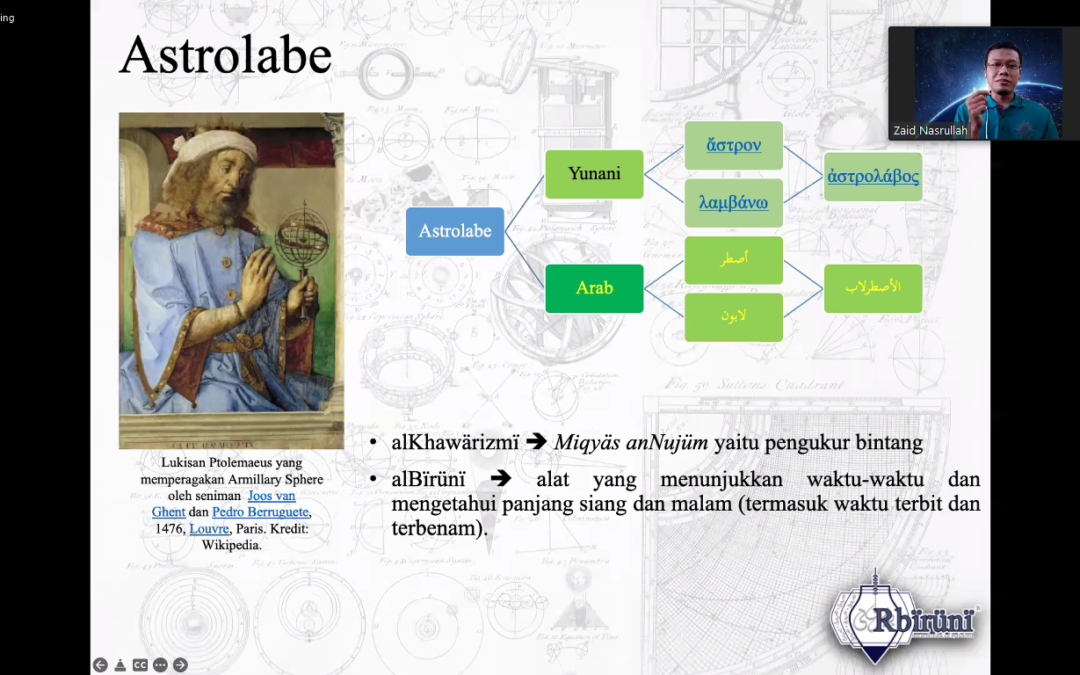 On Friday, March 4, 2022, the Astronomy Research Group, Faculty of Mathematics and Natural Sciences, Bandung Institute of Technology held an online colloquium with Zaid Nashrullah, S. Si from AstroFun Club as the speaker. Zaid is an alumnus of Physics Bachelor, Faculty of Science and Technology, UIN Sunan Gunung Djati. In this colloquium, Zaid explained about the astrolabe reconstruction and the astrolabe development that was carried out by him. The astrolabe was named “Astrolabe Nasrullah”.

Astrolabe is an astronomical analog computing device that is usually used as a multifunctional instrument for navigating, simulating, predicting, measuring, calculating, and knowing the position and dynamics of celestial bodies more easily and accurately. Although the astrolabe is a simple device, it can complete complex calculations and has good accuracy. Astrolabe has been used since ancient times by Islamic scholars, both for navigation and worship purposes such as to determine prayer times and Qibla direction. Zaid made the reconstruction and development of the astrolabe his final project.

Astrolabe has the shape of a plate that is composed of several parts. On the plate, there is a ruler called an alidade, and there is a aiming hole for aiming at celestial bodies. The shafihah section consists of al muqantharat, meridian (the middle line that divides east and west), zenith, twilight (consisting of twilight and nautical twilight), horizon, tropic of cancer, equator, and tropic of Capricorn. Meanwhile, the syabakah section, which means space-time, also has several features, namely the ecliptic, the equation of time (a ruler that contains information in units of time), zodiac, constellations, meteor showers (to show meteor shower information), and a calendar.

Zaid explained that the most difficult thing in working on this astrolabe is showing the calendar scale because it takes several times to make it successful. Unlike other astrolabe that only use the zodiac calendar, the Nasrullah Astrolabe also includes a solar calendar (January, February, March, and so on). In addition, for the zodiac calendar, other astrolabe usually only divide up to 30 days, while the division on the Nasrullah Astrolabe is based on the IAU, so there are 13 zodiacs.

In this colloquium, Zaid also showed a video demonstration of the use of the astrolabe. In the video, Zaid shows how to determine the time based on the height of the Sun and determine the Qibla direction. The height of the Sun is obtained by directing the eyepiece towards the target celestial body, namely the Sun. Then, by directing the ruler so that it coincides with the date scale at that time, the astrolabe time is obtained. These results are then corrected with Regional Time Correction (KWD) based on the location of observations and the equation of time (eq) so that the appropriate time is obtained. Furthermore, the Sun’s altitude data and time data can be used to determine the azimuth. With azimuth data, the astrolabe slab is placed horizontally, then the ruler is positioned towards the sun so that the orientation of the cardinal directions will be obtained (0° representing the north direction, 90° representing the east direction, 180° representing the south direction, and 270° representing the west direction). By turning the ruler to a number that corresponds to the Qibla direction of each location, the Qibla direction can be determined.

The colloquium ended with a question and answer session. In this session, Zaid had said that he planned to conduct workshops on the astrolabe to the pesantren where he teaches and in several other locations, considering that this tool has many features that make it quite complicated to understand in one demonstration. Zaid also said that this tool still has shortcomings, such as seeing through the eyepiece hole which is blocked by a bolt, so that in the future Nasrullah Astrolabe will continue to be repaired so that it can be used more optimally. [Beta Miftahul Falah]

Documentation of the colloquium “Astrolabe Nasrullah” on Friday, March 4, 2022