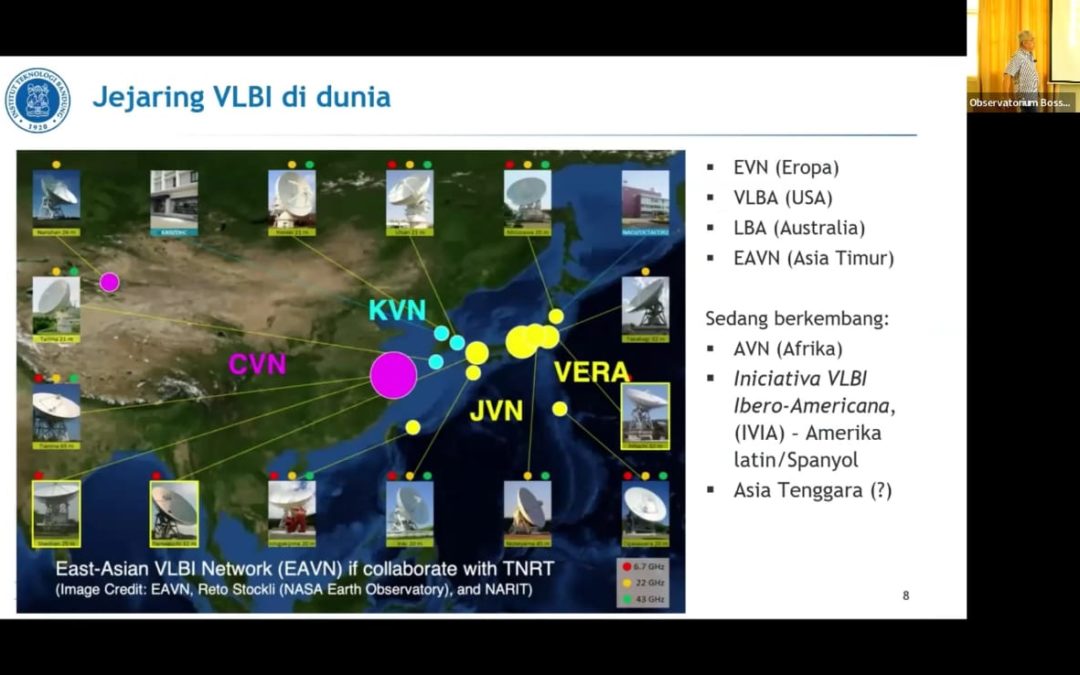 Since the 20th century, radio telescope technology had been used for various purposes and still developing. In the seminar organized by Bosscha Observatory last Friday (5/20), Prof. Dr. Taufiq Hidayat talked about one of the projects in radio telescopes, namely the VLBI Global Observing System (VGOS). It was a hybrid seminar broadcasted from Kerkhoven House, Bosscha Observatory, and also from an online Zoom Meeting platform, guided by Dr. Permana W. Permadi.

Prof. Taufiq started the presentation by showing the blackhole image that was obtained by one of the global radio telescopes network, the Event Horizon Telescope (EHT). EHT is a project that processed data from multiple very-long-interferometry (VBLI) stations on Earth. The project was successful from bringing blackhole as teoretical object into observational realm.

The VLBI in principle is a substitute radio telescope with a very large aperture, which is impossible from an engineering point of view to be build. In VLBI, radio signals from space are captured by antennas distributed in multiple stations on Earth – which behave as interferometers. The signals then were combined to form an image. To this date, there are many networks around the globe, that is EVN (Europe), VLBA (USA), LBA (Australia), EAVN (East Asia), still developing AVN (Africa), VIA (Latin America/Spain), and in South East Asia.

The VLBI is not only used for astronomical purposes but also geodesy purposes. This is the background for the establishment of the International VLBI Group for Geodesy and Astrometry (IVS) which eventually involved many countries in the world. Asia-Oceania VLBI Group for Geodesy and Astrometry (AOV), a subgroup from IVS for the Asia region has involved countries such as Japan, South Korea, China, Australia, and New Zealand. Nowadays, the development in South East Asia is also being intensified because there are still gap baselines in the equatorial region such that VLBI in South East Asia can hopefully fill the gap.

The IVS currently in the middle of developing a next-generation VLBI system which is called VGOS (VLBI Global Observing System). VGOS has goals to have an accurate measurement of up to 1 mm on a global scale and is expected to improve the accuracy by one order of magnitude over the legacy S/X band. The IVS provides specifications for VGOS as a small telescope (diameter of 12-13 m), high-speed (12 degrees/second), equipped with a wide receiver band covering 2-14 GHz, and capable of performing up to two observations per minute. The specifications specified by IVS have become standard and have been industrialized. Numerous VGOS telescopes have been built and there are still some projects that continue to be developed.

To fulfilled the project, there are some aspects that need to be considered such as data management, sensitivity, scheduling, RFI environtment, and even technical issues. In The VLBI, observed data can reach up to 7 TB/hour for one antenna. In comparison, ALMA has 64 antenna for one observation project, therefore need big data storage and vary high computing power. In IVS observation program, there are schedulings for different purposes for geodesic and astronomical. Observations are divided into three sessions, namely EOP, TRF, and CRF session. At least two third of the time VGOS performed is used to work is the network. The VGOS also needs frequency allocation for spesific bandwidth that is needed for radio astronomy can be protected, so the project involved many parties and multidisciplinary collaboration.

Prof. Taufiq added, the VLBI has big portion of the lifetime used to work in the network, but that does not mean VLBI only working as interferometers but also can be use as a single dish. There are some observations that can be performed by VLBI either as interferometers or a single dish, that is research on Star Formation Rate (SFR), the structure of Active Galactic Nuclei (AGN), and pulsar. In other aspect for geodesy, VLBI can play a role in finding out three important pillars of geodetic, fault movement, the atmosphere, and to find out various phenomena of the Earth core. The VLBI can also play role on fundamental physics such as measuring gravitational time delay on N-body system.

“VGOS in Indonesia will become important for capacity building in the field of science and technology and for the continuation of developing radio astronomy. VGOS is also the most important interdisciplinary collaboration in Indonesia which will fill the baselines gap in the equator region. We hope there are going to be more new VGOS stations in Indonesia and there will be a growth of research groups that interact with each other in the various field”, concluded Prof. Taufiq at the end of the presentation. [Beta Miftahul Falah]